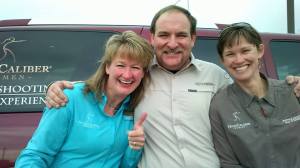 I’ve never felt disadvantaged being a female.  I am lucky, or blessed, I suppose.  My parents never discouraged me from trying new things or pushed me into specific activities that seemed better suited for a girl.  My father wanted me to be a strong, brave, and capable person.  Yes, person.  My mother has applauded most everything I do, even if it’s while shaking her head.  Being a girl never felt a burden.

While at Shot Show last week in Las Vegas our first day there was an “invite only” range day.  There were more than 150 exhibitors from Armalite all the way to Zippo.  My co-worker Lynn, the owner of High Caliber Women, and I walked around with eyes as big as dinner plates.  We decided to divide and conquer to try and shoot as many of the guns that were there.

There is ONE video I wish I had of me shooting a firearm.  I was wandering around in an overwhelmed stupor and saw my co-worker, Andy, shooting a gun at the Rigby booth.  I wandered up and was immediately greeted by this gentleman with a British accent.  I was feeling a bit cheeky  so when I was told to wait another moment for Andy to finish shooting I said, “Nah…just kick him off the line…he doesn’t need to shoot anymore”.  There was a bit of an unspoken exchange between the two booth attendants at that moment.   The British bloke walked me over to the available one and the other guy was like, “You’re gonna have her shoot THAT one first?”.  Insert my ‘innocence’ here.

The bloke with the accent hands me the gun.  “Heavy”, I say.  I ask what it is and then I look at Andy and ask, “Will it kick like my 30-06?” and Andy just chuckles.  He grabs a cartridge and hands it to me.  It’s definitely big but the stamp means nothing to me.  I love to shoot guns but don’t know much (insert ‘almost nothing’ here) about caliber, ballistics, etc.

So here I am with this heavy rifle in my hands, getting ready for a standing shot.  I take my stance just like I would while shooting my own 30-06 hunting rifle.  I am just about to pull the trigger when an image of that very large cartridge floats across my mind.  I pause to plant my feet a bit wider and lean quite a bit more into the gun.  Slow and steady trigger press….BANG!  The font on this computer is just not big enough to convey what that gun felt like when it went off.

I am a girl of many words.  I love words.  I love scrabble.  I write poetry.  But, I could only think of two words in that moment, “HOLY SHIT!”  (Insert ‘innocence lost’ here).

Okay, so basically I just took a standing shot with a gun that takes down elephants.  Aggh, I am kicking myself mentally.  Why did I not get it on video?  My only witness to the event was my co-worker’s play by play as to what was happening behind me as I prepared for this shot.  Apparently, after the gun was handed to me the two blokes at the booth got behind me with their hands up; ready to catch me as I fell back into their arms.  All Andy had to say about my stance and my reaction to the recoil was, “Awesome!  You should have seen their faces!”.

The gun went off, it recoiled vertically, but it did not move me horizontally.  It came right back down into my aggressive stance without one smidge of a shove backwards.  Thanks to my training with High Caliber Woman and Jackson Hole Shooting Experience; I had denied those blokes the “damsel in distress save” they were waiting for!  The boys at the booth were so impressed I got a handshake, a kiss, and a proclamation of, “You are a brave girl!”.

Which brings me back to the moral of my story.  After four fantastic hours of shooting guns, we are riding to our hotel in  Vegas and Lynn asks me, “Did you notice any other women shooting guns today?” I thought about it and realized that I had seen a few women meandering around but in four hours I had only seen one other woman on the shooting line besides us.  I know there were more than that but I only saw one.  It hit me that we were the minority at the event.  We were probably less than 5% of the attendees!  But that isn’t even the amazing part.

The amazing part is that I never noticed.  I never once felt out of place, looked at funny, or condescended upon.  I never even noticed that I was one of a handful of women surrounded by men (okay, I noticed all the men, who wouldn’t?)  I was just a person, errr….zombie, who liked to shoot guns wandering around with other people  who like to shoot guns with huge silly grins on our faces.

Thank you shooting industry!  Thank you Shot Show!  Thank you for accepting me as another person who loves to shoot guns!

5 thoughts on “Simply Blown Away”